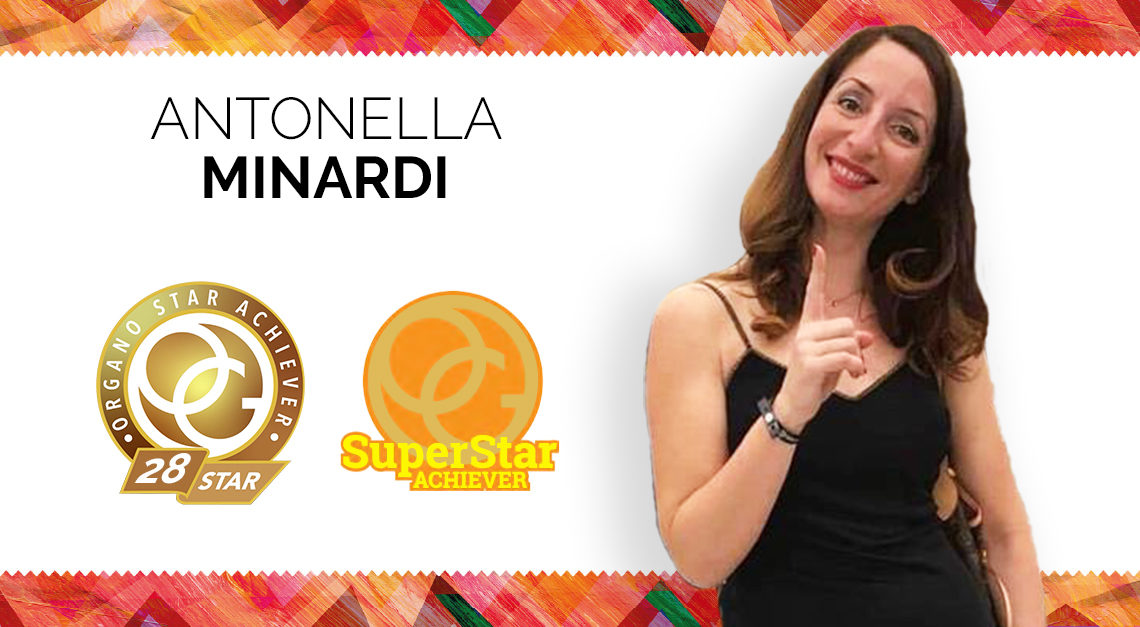 Antonella Minardi met the opportunity of ORGANO™ on the 23rd of June, 2018, when a friend ask her to go with her to an international event that was held in a hotel in Rome.
As soon as the hotel’s sliding doors open in front of her, Antonella immediately feels in resonance with the environment that unfolds in front of her.

The positivity, the warmth, the smiles, the welcome as well as the recognition struck her right away. She does not think twice to start with the Company when this global opportunity is presented to her into products infused with “Ganoderma Lucidum”, of which she did not know the properties.

A little later Antonella returns to her homeland, in Cilento, and starts her business from her pantry from where she removes the old products to replace them with the ones marked ORGANO™.

How did you reach your SUPER STAR ACHIEVER qualification?

Since the first month of activity, my family and I have started to make extensive use of the products, which made me feel more lucid, reactive and energetic. The people I related to noticed this and asked me for more information about it, I was happy to share my story with them and in the meantime offer them a cup of our wonderful coffee. So they too started buying the products. My Star Achiever journey started 28 months ago, starting from the first month of activity. In fact I didn’t know what the Star route was but I found myself doing it, without even knowing it.

In addition to being an avid lover of the product (which made it easy for me to recommend them), I also became good at attracting and recommending the business to the people I spoke to, even without any marketing skills. And that’s how I reached different qualifications, VIP in the first month, Platinum in the second, Platinum Elite in the third. In November 2018, in the fourth month of activity, I reached the qualification of Sapphire and my four first lines that for the first time simultaneously get to their Star Achiever, allowed me to become Super Star Achiever and also this time, even ignoring that there was a recognition for this goal.

To date, in November 2020, I am 25th Super Star Achiever, I have 6 Star Achievers front lines and dozens and dozens of Star Achievers in downline. All the people who choose to join our team become convinced supporters of the Ganoderma, as well as satisfied consumers of our products, which automatically leads them to become Star Achiever from the first weeks of activity.

How did you build your business?

Not being an expert in the sector, in the first months I developed my business in a completely instinctive and natural way (I like to say that I did it “with the heart”), without specific strategies and driven only by great enthusiasm.

From the Sapphire onwards, thanks also to the proximity and support of my uplines, I began to carry out a dense and tight schedule, to train myself constantly and to do a lot of action. This allowed me to reach the Ruby qualification in May 2019, in 10 months of activity and 6 months from the Sapphire and then the Emerald qualification, in November 2019, in 16 months of activity and 6 months from the Ruby, helping my first Star Achiever lines to reach the qualifications of Sapphire and Ruby (4 Sapphires and 1 Ruby).

What are your three tips for developing a successful business?

1) Pay attention to the person and show a sincere interest.

From the very beginning, my lack of experience in the sector allowed me to have a genuine and spontaneous approach to people, not at all instrumental, which was very popular and meant that the barrier of distrust was not raised. My contagious enthusiasm completed the work. They were swept away by a whirlwind of positivity and told me yes. All this was possible only because my only interest has always been to make people feel good, physically, mentally and emotionally.

The distribution of the product and/or the sponsorship were the direct consequence, not the primary purpose.

This can be an innate gift, so much as a consequence of study and experience. When it is the result of both, there is no limit to anything.

Having a clear idea of ​​the goal you want to achieve and being aware of where you are starting from, allows us to trace the path and make adjustments along the way. Everything has to be well planned in order to keep control over everything. But then you get to a point where, “getting up to speed”, you have to lose control in order to fly towards the Dream. As long as you are too focused on analysing and calculating everything, you cannot take the flight. The only way to do this, keeping only faith in the path, is to reach that bit of madness and healthy unconsciousness that allows us to directly visualize ourselves as we want to be, once we have achieved our goals.

The rest will come by itself!

Where do you see your future in ORGANO™?

My next target is the Diamond.

The path for the Crown Ambassador has already been traced, with a lot of programming already shared with the Team in a training a few days ago.

My dream is me getting in control of my life. Organo is my company and I see myself in a future in which I use my skills to the fullest, putting them at the service of humanity.

Where will I be? Around the world.

Thanks to Organo I started doing TOP level trips.

I have been to Mauritius, Tenerife and I look forward to travel to Necker Island, Richard Branson’s private island, being the winner of the Chairman Bonus, together with my first line, the Ruby Anna Maria Vitale and my Uplines, the Emerald Daniele Sammartino and the Blue Diamond, Riccardo Benato.

I am very attached to the Cilento, so I will always have an eye on the spread of well-being in my land, but I am serenely open and receptive to the places that will call me back. I know I have big wings to fly and strong roots to return, but I will be moved by those “important reasons to stay” referred to by the Dalai Lama.

My only limit? The horizon. My trip? To infinity and beyond… I am infinitely grateful to Organo for making me become more aware of it, day after day and for making the realisation of my dreams take shape!

*Disclaimer: It is never recommended to adopt an individual approach to the management of health problems. All blog content is provided for information, general knowledge and sharing purposes and should not be considered as medical advice. The information contained in this blog should not be used to diagnose or treat any disease. Under no circumstances may it constitute a prescription for the treatment of medical conditions or a substitute for specialist medical advice. This general information and all the topics illustrated herein are not intended to treat, diagnose, cure or prevent any disease, metabolic disorder or health problem so they are not intended and should not replace the opinions and advice of health experts. Actual income resulting from the activity of Independent Distribution Partner will depend on the amount of time and effort an individual devotes to his/her business. 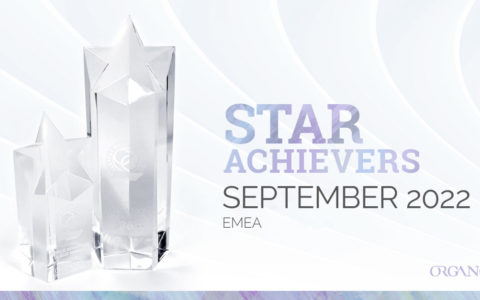 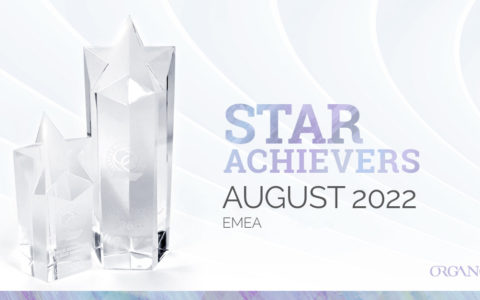 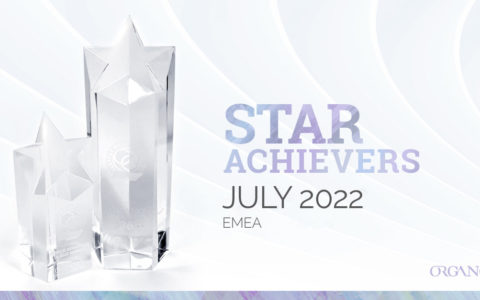 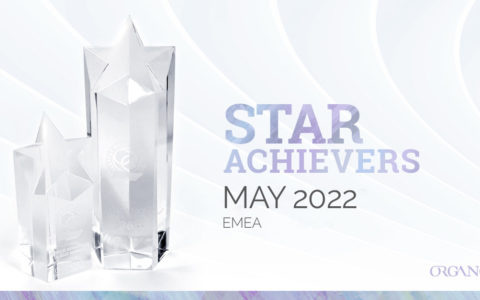 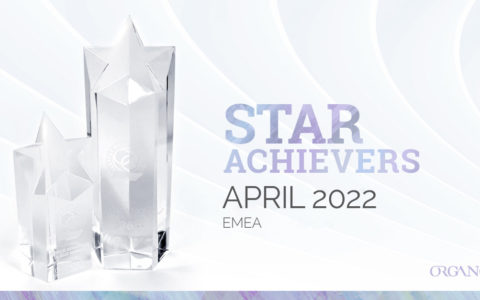 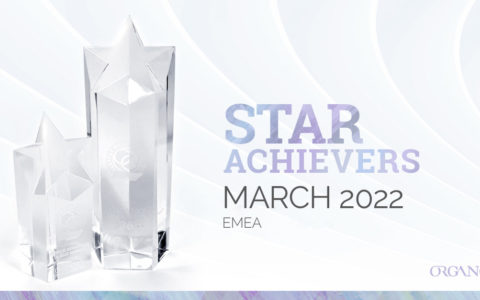 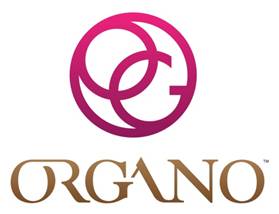